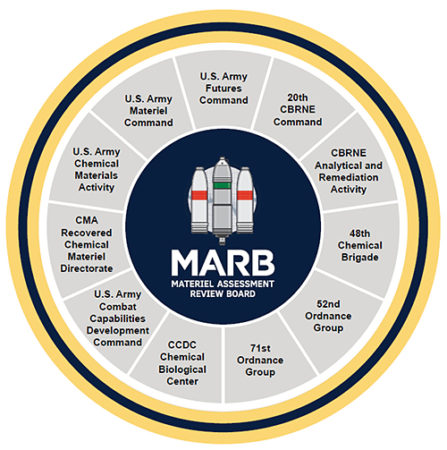 Overview
The U.S. Army Recovered Chemical Materiel Directorate (RCMD) provides centralized management and direction to the Department of Defense for assessment and destruction of recovered chemical warfare materiel (RCWM) in a safe and environmentally sound manner. Chemical warfare materiel is most commonly recovered during range-clearing operations and environmental remediation efforts on active military installations and formerly used defense sites where manufacture, testing and disposal of chemical materiel took place. Recovery sites may also include land turned over to other government agencies and land transferred to private ownership.

In January 1995, the U.S. Army established the Materiel Assessment Review Board, or MARB, to make decisions regarding recovered items with unknown fills. Many munitions and containers recovered from old burial sites at these installations lack historical records and identifying marks due to age and condition. This makes identification difficult and requires the use of non-intrusive methods to identify the item, its fill and explosive configuration. The MARB makes the definitive identification of the item’s contents for the Department of Defense.

MARB roles and responsibilities
RCMD maintains written records for and funds MARB activities and required responses. These activities may include providing protective equipment, communications equipment, travel and any equipment necessary to safely and properly perform the mission related to recovered items containing an unknown fill.

RCMD deploys transportable equipment and qualified personnel to safely perform on-site response when items with an unknown fill are recovered. The assessment technologies provide the MARB with critical information regarding the item’s contents and explosive configuration.

Assessment and review process
The Army is committed to accurately assessing and classifying recovered materiel and providing maximum protection to workers and the public, while complying with all applicable environmental rules and regulations.